For today's offering of old toffee we cross the mighty ocean
bound for America and the frozen wastes - shows how old
my atlas is, Canada was still waiting to be discovered!
We leave "feignites" far behind as we go in search
of it's trans-Atlantic counterpart - "uncle".
﻿﻿﻿
If I cast my mind back to those dark days of my youth in
the rat infested gutters of saarf-London "uncle's" came with
three balls unlike in modern street parlance where an
uncle is thought to be the most likely member of your
family to wish to show you his dangly bits at dead of night.
(No suitable images available.)  But I digress .......
﻿


A trip to uncle's could mean only one thing - money was

tight again and the family silver was going back into store.
Uncle was your friendly local pawnbroker, moneylender, usurer
who's been making something of a comeback recently I hear.
And why the balls?  They were always gold and said to be
"symballic" of the Medici's, a powerful Florentine family
in the Middle Ages, although Grandad always said they
meant "two to one you won't get your stuff back".
He was a miserable old git sometimes. 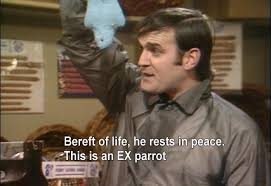 Tell us the origins I hear you cry, we can't take much more of
this sickening nostalgia, so I'll cut to the chase.  At the end of the 19th
century, long before Monty Python, there was in England a parrot
joke doing the rounds.  It subsequently crossed the Pond and went as follows:

A gentleman was boasting that his parrot would repeat anything he told him.
For example, he told him several times, before some friends, to say “Uncle,”
but the parrot would not repeat it.


In anger he seized the bird, and half-twisting his neck, said:
“Say ‘uncle,’ you beggar!” and threw him into the fowl pen,
in which he had ten prize fowls. Shortly afterward, thinking he had
killed the parrot, he went to the pen. To his surprise he found nine of the fowls
dead on the floor with their necks wrung, and the parrot standing
on the tenth twisting his neck and screaming:
“Say ‘uncle,’ you beggar! say uncle.’
﻿

Much ado about nothing really but it passed an amusing couple of
minutes.  Now where did I put that pawn ticket it's time to
get the tiara out of hock again?