A history lesson about things to come ....

They say you should always be careful what you wish for,
(and I'll tell you why in a moment),
but if you screw up your eyes really tight and then look
way off to the horizon you might just catch that
first, fleeting glimpse of a brand new Long Dog about to be
let off the leash to amaze and delight you.

And why do I advocate care and caution with your wishes?
Because it's a whopper.  It will take over your life.
The desire to own and stitch it will be impossible to resist..
So don't look into it's eyes if you don't want to become lost forever.
You have been warned, read on if you dare!


As I've said before, Norfolk is a county in the east of England
where I now live. It’s a very special place with a language,
way of life and humour of it's own. The motto on the coat of arms
of Norwich (the county town) is Do Different which is a shortened
version of the very aptly coined phrase -  People in Norfolk dew
things different- and I can certainly vouch for that.
.
Norfolk, as you might expect from the foregoing,
also had its own style of sampler in the 18th century. The design
featured a very large, central diamond cartouche made up of saw toothed
lines often divided into three sections containing alphabets,
a Bible verse and linked octagons filled with deer, lions or dogs standing
on hillocks surrounded by trees. Some even had side panels (ears) filled
with an urn and flowers. Then, as if that were not enough,
the whole thing was encompassed by an exuberant, free-style floral
border in each of the four corners. Magnificent.

Never one to shy from an obvious challenge, Long Dog has taken the
old traditional components and given them it‘s own interpretation.
It has dared to take the old saying to heart and has decided to Do Different!

All that, and the only thing I've given away so far
is the name.  Repeat after me "I should like the chart of
Do Different for Christmas please.
I have worked hard all year and deserve a treat".
In certain cases the second sentence may not apply
but there's no harm in saying it any way so long as you
cross your fingers, as well as your stitches, first. 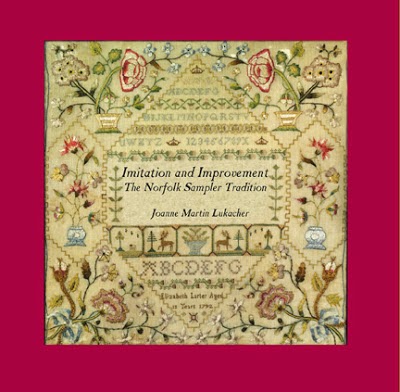 And if you're a seeker of wisdom and truth you could do far worse
than order yourself a copy of Imitation & Improvement:
The Norfolk Sampler Tradition by Joanne Martin Lukacher
published by In The Company Of Friends
and read for yourself the real history of the Norfolk sampler.

More teasey bits to follow later this week
before the big launch next Saturday with trumpets,
flash mobs and fireworks all at no extra cost.