.... not in a chorus girl/blue comedian sort of a way, although that might be fun, but in a "I'll show you mine, if you'll show me yours" behind the bike sheds sort of a way.  Do you remember Camilla, and such invaluable experience for later life I always think. Someone had better kick off and as I was never known for being slow at coming forward (particularly behind the bike shed) I thought I'd show you my painting of Mouche and my childhood companions Faithful (on the right) and Faith's Daddy (on the left) all beautifully captured by artist Elle J Wilson of Almost An Angel 66 if you want to see more or her work.  It's worth a look.  Well you didn't think I was going to let you see what I'm sewing just now did you?  Tisk, tisk! 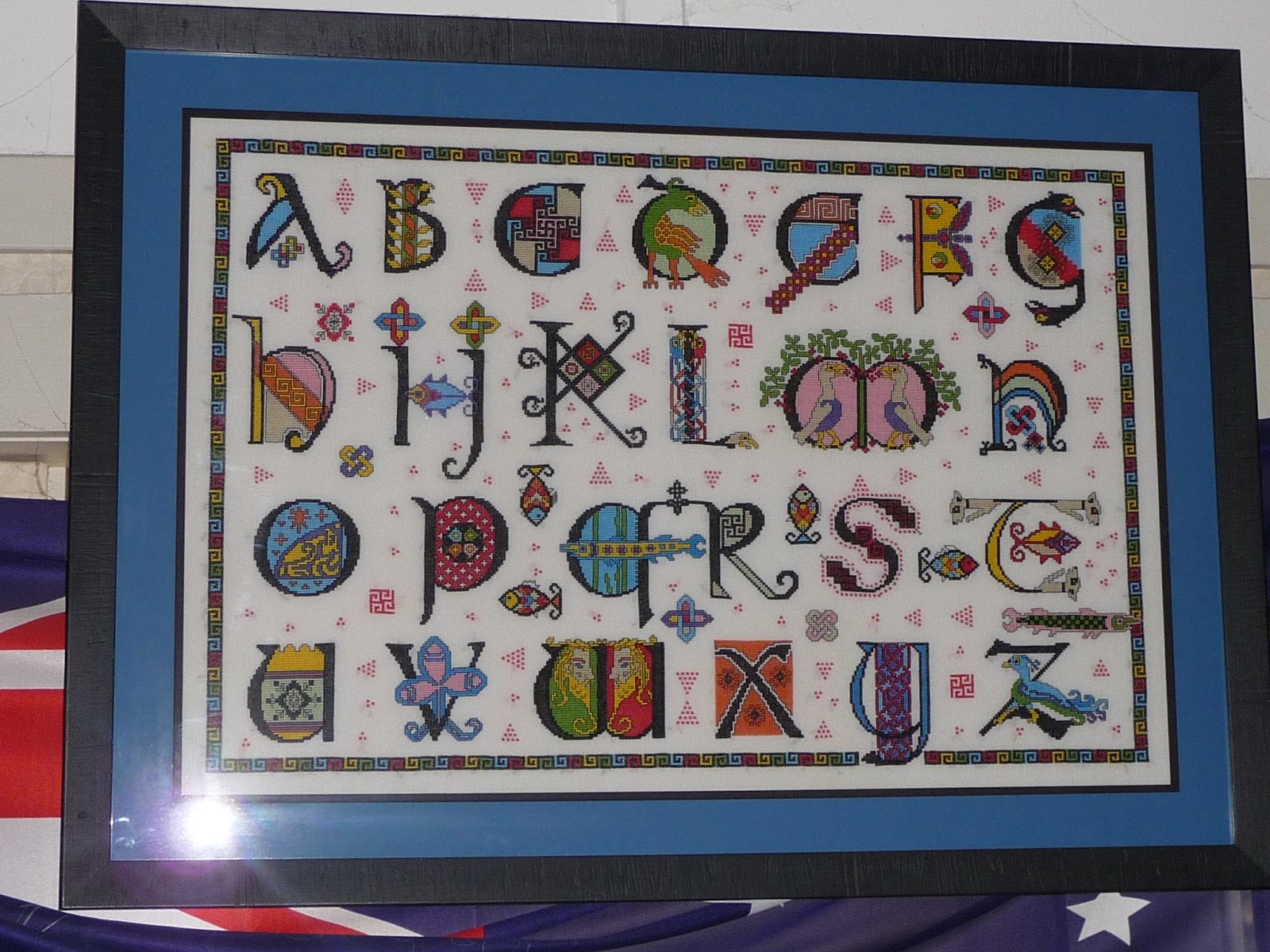 Here from the Land of Oz (see the flag), by the miracle of modern technology may I present St Senoch stitched by our very own little Louise (she's the Wizard's daughter you know although she doesn't make a big thing about it).  And never one to be put off by hard work she then went on to complete Opus Magnusson (below) which she keeps behind frosted glass doors when she isn't actually entertaining guests for fear it might fade if exposed overlong to the strong Australian sun. 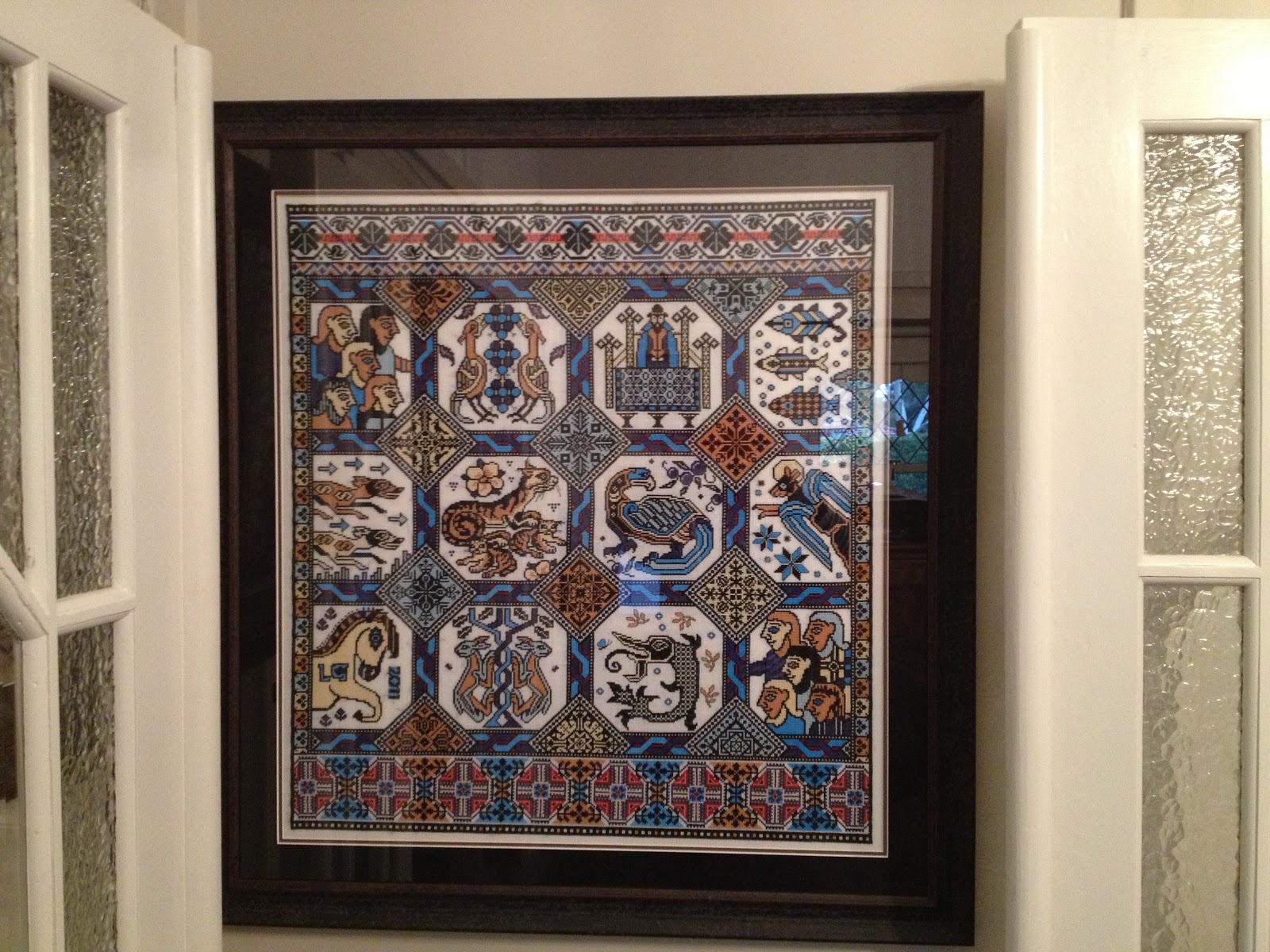 Yes, it's true, way down under when they're not putting another raw prawn on their barbies or trying to pick huntsmen spiders out of their budgie smugglers (Speedo's to you Alice), some of them actually do find time to sew.  And because they're all marsupials there's never any problem as to where to put their threads, they simply tuck them in next to their joey (well how do you spell it?) and off they go - fair dinkum. 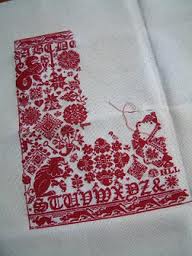 As no one else has actually sent me photos of their WIPs (always sounds a bit S&M that) or finished pieces, I had no alternative but to trawl the web to find out what you've been up to and who will finally own up to what I discovered.  The caption for this St Reatham above should be "Has anyone found page 3 of my chart yet?" 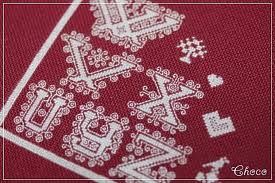 And who is the mysterious Choco in the middle of stitching Renaissance and more to the point will they get very cross because I've used their picture.  Let's hope not.  On the subject of apathy, the recruitment rate of followers has taken a nose dive recently.  Must I always be behind you cajoaling and threatening like the Crimplene Queen used to do.  I haven't told you about her have I?  That's best left for another day perhaps when I'm really desperate for something to write about. 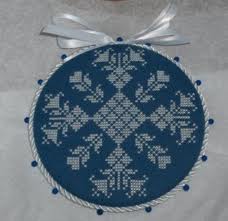 What's this we have here.  Someone with a mind of their own obviously so it can't be one of Alice's creations.  A dear little pin keep and look how evenly spaced are all the pins.  That says a lot about a person don't you think when all their pins are equidistant like that? 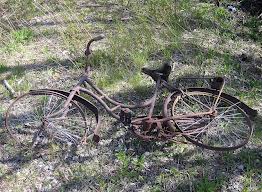 I wonder if my old bike's still about somewhere and whatever was the name of that ginger-haired lad from Scotland who was in the year above mine.  He showed such promise, and made such promises - those were the days!
Posted by Long Dog Samplers at 22:07