The other day during my stay at the health spa and fitness centre (hospital)
I was awoken at some ungodly hour by the noise of a team of reasonably
attractive looking workmen busily jet washing the entrance
to the West Block.

Four of them spent a considerable time meticulously removing
every dog end and blob of chewing gum from
the paved entrance area.

They were just finishing and were starting to pack up their
equipment having done a job to be proud of when
out of the automatic doors waddled a heavily pregnant
young woman in a pink dressing gown towing a drip stand.

﻿
She quickly lit up her cigarette and stood there puffing away.
Then without further ado she cast her dog end on the
freshly cleaned pavement right next to the bin provided
for smokers and ground it out with her foot.

I was saddened by her actions for many reasons.
What must the nurses and doctors think who are trying to
help her and her unborn child.
What a total lack of disrespect for the workmen who
were trying to keep the public area clean and tidy for everyone
to enjoy but worst of all ....
what a selfish disregard for the new life growing inside her.
Her future son or daughter. 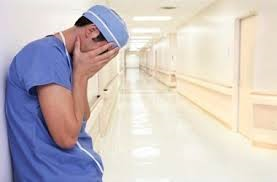 I counted a further three such women throughout the morning.
Sometimes I despair!