How was it for you?

Whoa!  That's gross Camilla and way too much information.  Besides I didn't think that was still possible for a woman of your age, what on earth was he standing on?  What I was actually enquiring about was last week's capricious weather and what it was like in your neck of the woods.

After the big freeze last weekend by Tuesday it was clement enough to take lunch on the terrace, without a coat I might add, for the first time this year.  There I was all set to go - green salad, walnuts from the garden and my favourite goat's cheese the "enrobe", a local speciality, when the phone rang ... 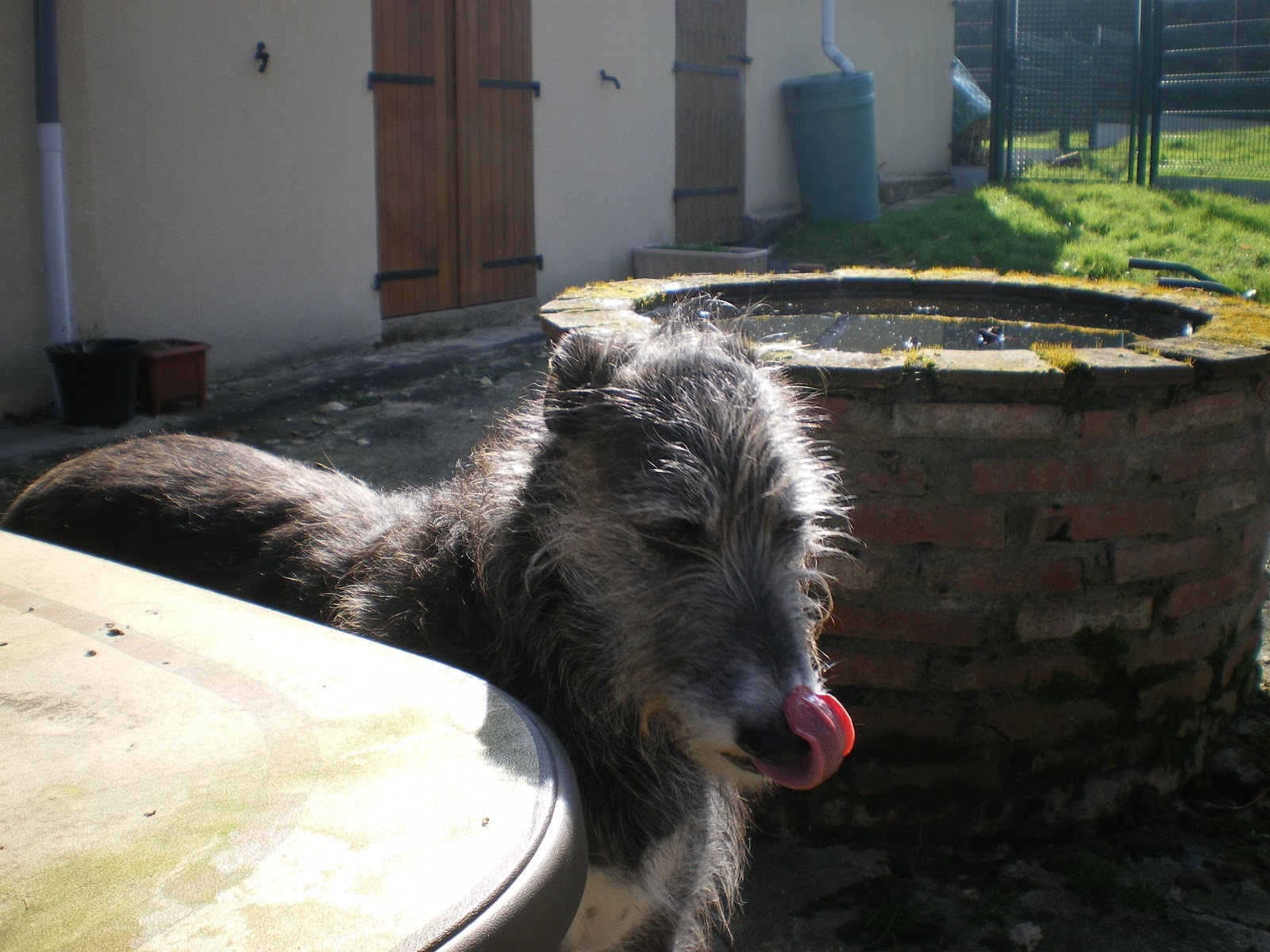 Just another cold caller and just enough time for the "enrobe" to mysteriously disappear - where could it have gone, along with a couple of walnuts, I wonder - answers on a postcard please.  Miss Mouche when questioned demanded to have her solicitor present.

The weather continued to improve and for want of a groundsman I have been working like a metaphorical navvy in the Chateau Long Dog grounds just tidying up before the grass gets a wiggle on again.  Certainly no time for dancing round the fire casting the odd spell or two and anyway the other two weird sisters are still indisposed after a multiple broomstick pile up last Halloween.
I've done so much power lifting these past few days I think I shall cancel my gym membership.  Can women get six-packs by the way because after my exertions there is definately something going on under my thermals - a strange rippling in the old subcutaneous fat.  Moving on .....

I was absolutely delighted to receive this photo from a lady who I know only as Janice.  Isn't this piece magnificent?  She's taken Sonne Spotte and Beautie Spotte and combined the two with just a touch of Froth & Bubble in the centre for good measure.  I love the way she's added the start and finish dates too - look carefully they're there top and bottom.  You've no idea what a buzz it gives me when someone takes a Long Dog for a walk like this.  Bravo!

Emmanuelle has stuck to the script for this Sonne Spotte in DMC threads but what an innovative way to display it - and probably much easier on the wallet than traditional framing.  Nice one.  Keep them coming please.

Today, after a balmy mid-week, we awoke to snow again and the novelty is wearing just a little thin so what better way to cheer ourselves up than with Hare Apparent - creases also apparent for which I make no apologies, I'm far to lazy to get the iron out just for a couple of photos.

And here's a final crumpled teaser of Kell's Kritters - "Delicious isn't it?" she enquired modestly.  They're both out next Friday so all that remains now for me to do is to leave you in a state of keen anticipation and expectancy and after what you were up to Camilla the latter would not surprise me, stranger things have happened to much younger women than you.
Posted by Long Dog Samplers at 01:04