The Feast of St Shrivel d'Huppe

We're all very excited here at the Chateau because this afternoon we celebrate a local feast day which dates back to the dark ages and marks the coming of summer.  No Alice dear, not last week before the clocks had changed.

Local legend has it that there was an old hermit who lived in a tuffeau cave on the estate and every year a hoopoe (or as it's called in France a Huppe fasciee) on its summer migration from Palestine would seek him out to be shriven of its sins of which it has many.  It is mentioned in the Bible, Leviticus 11:19 and Dt 14:18 where its name is included in the Lists of Abomination! whilst in my dictionary it is described as having a large erectile crest.  It does say that - really! See for yourself. 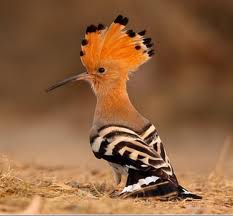 Each year the aged anchorite would listen to the bird's terrible deeds and each year would give the same penance - to fly the bounds of the hamlet of Mouline, where lies Chateau Long Dog, three times without a pause.  So revered was this ancient troglodite that upon his death he was sanctified and given the name St Shrivel d'Huppe in remembrance of his deeds amd his saints day is 1st April around which time the hoopoes return and planting can commence provided it's not too cold still. 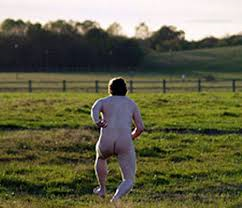 As part of our celebrations (you celebrate how you like, I prefer our method) a fit young man is chosen from amongst the estate workers to run the bounds of Mouline naked like a hoopoe.  All my serfs and I will watch him in the distance crossing the back fields until we get our first close glimpse of him as he appears down the lane behind the Chateau.  I do hope we can find someone a bit "fitter" this year.  Last year's candidate was a very poor show.  This archive photo shows tension rising at the finishing line back in the good old days when people celebrated with guns!

This is a very tense moment for one and all because should anyone get carried away with excitement and cry out "Look, it's Shrivel d'Huppe" we will have to wait a further 10 days before planting can commence.  However if everyone remains silent either from rapture (the women) or jealousy (the men) this signifies that it's time to get out our seeds and get sewing.  And now ladies, transvestites and sailors it's time for you all to get back to your sewing because that was as good as it gets for this weeks little bit of French nonesense! 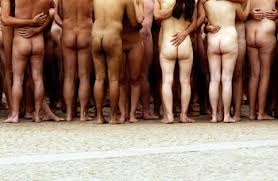 It always seems to end up like this, here we all are last year shortly before we all went off our separate ways to get planting - can you spot me, I'm in there somewhere!  And Camilla's the one in the middle but then she always was easy to find - couldn't stop a pig in a passage as my grandmother quaintly used to say.
Posted by Long Dog Samplers at 06:15