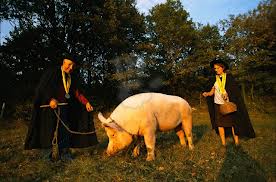 Yes, it's that dastardly duo the rat catcher and his wife out hunting for truffles for their Reveillon (Christmas Eve) feast.  It's been so quiet since the SAS lads broke camp but sometimes that wood out the back gets busier than Piccadilly Circus on a Friday afternoon - especially when the moon is full but that's a tale for some other time. As you can see, the Mayor has had the municipal snow machine out just in time to give St Flovier church a very light dusting of seasonal magic which is just about as exciting as it gets in this neck of the woods.  Oh no! I've just mentioned the "w" word again.  It's a new obsession taking a grip on me.  So swiftly on to to-day's advertising feature ...... 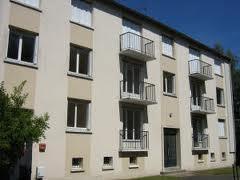 This entire block of six apartments along with garages and caves situated in beautiful down town St Flo can be yours for the princely sum of 256,000 euros.  Yes, that really is the price so all you budding entrepreneurs smash open your piggy banks and get a wiggle on to avoid possible disappointment.  I hear the Arabs are interested. 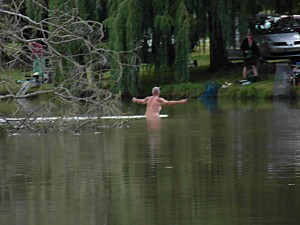 And on a cultural note, here are some of the locals taking part in the annual Christmas Day pond leaping ritual when the Mayor and other civic dignitaries toss 2 euro pieces into the water for the villagers to dive for. As you can see, Mouche and Geordie have invited several of their chums over to join in the festivities so all that remains is for all of us here at Chateau Long Dog to wish the entire planet (perhaps even the Universe if they've got good broadband speeds) a very ...

And if you want to make an old woman very happy (you should be ashamed of yourselves) let's get that hit counter rocking!  The next target is 2000+ by 2013 - you can do it if you really want to.  Stop, I'm showing the first signs of "song lyric syndrome" now for which there is no known cure.
Posted by Long Dog Samplers at 00:20