Rings that tell a tale

I was having a rummage through my drawers this morning,
as you do when you're sometimes a bit bored and wondering
what to do with yourself, when I came across this little, battered ring
that's been in my possession since I was a child and which
sadly broke after all these years while I was trying to photograph it. 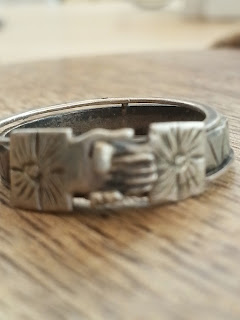 It was given to me, after the family had cleared the house of an old maiden aunt
who had recently died, as no one else seemed to want it.
And I just love it - if only it could speak.  Why had Nora never married,
who gave it to her, what happened him, what was their story?
Alas, I shall never know.


But what I can tell you is that it's called a "fede" or "faith" ring.
It's a group of three rings in one - two hands clasped over two hearts.
This style can be dated back to Roman times and it's where
Claddagh history begins.  The Claddagh ring is a unique version
of a fede ring and has been the traditional Irish wedding ring
since way back in the 17th century.


The Claddagh is an ancient Gaelic symbol of everlasting
love (heart), loyalty (crown) and undying friendship (hands)
who's motto is:

It's a ring that sends it's own message with no questions asked.
On the right hand with the heart facing out then the young lass'
heart has not yet been won.  Still on the right hand but facing in
then some young man has definately turned her head.

On the left hand facing out then she's got herself engaged to her
young man and finally, facing in her heart has finally found a
home in marriage.
Claddagh history merges with tales of the sea in the town of Claddagh,
which is said to be one of the oldest fishing villages in Ireland.
For centuries, fishermen from the area took to sea with the Claddagh crest
on their ships and sails. The crest was used for identification
- fishermen from outside the area fishing in their waters were chased
away or killed. So the Claddagh ring is also an original symbol of the
"Fisher Kings" of the Galway town of Claddagh, Ireland.


A dark chapter in Claddagh history, but one in which the Irish eventually
triumphed, was the Great Famine in the mid-19th century.
As thousands fled their beloved land to escape starvation, the Claddagh ring
was often the only thing of value they owned. Sometimes it was their only
inheritance and the only reminder they could keep of the land they loved.


As the Irish settled throughout the United States and Canada, the Claddagh
ring became a stunning testament to Erin and the proud heritage of her people
all over the world. It became quite honorable to be a Claddagh ring bearer.
In fact, it was the only ring Queen Victoria ever wore that was made in Ireland.
Later Queen Alexandra and King Edward VII followed suit and became
Claddagh ring bearer's themselves.


Throughout Claddagh history, the ring has been handed down from mother to
daughter with the saying, "With these hands I give you my heart and I crown it
with my love." There is no traditional age when the ring is supposed to be handed
down. Each mother determines when her own daughter is ready for
this special family heirloom

Sorry Nora - yours ended up with me.