I have cast the runes, thrown the dice, spread the Tarot and
crunched the numbers.


I have sat up far into the night clutching balls (crystal, of course
- whatever did you think I meant?)  I have drunk endless cups of rosie
in order to study the leaves and sundry bits of dunked biscuit at the
bottom for signs and portents, and have made countless trips
to the loo as a direct result of my endeavours.
"And to what end, woman?" I hear you cry.
To peer into the future, that's why, and to bring you
GIPSY JULIA LONG DOG'S PREDICTIONS FOR 2015!
- Long Dog sales will increase by 100% due to new marketing methods
which will include subliminal advertising on the blog,
threatening text messages and a FB campaign of harassment. 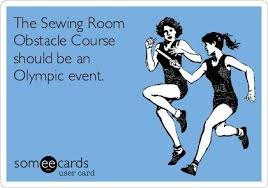 - Cross stitching will finally become accepted by the Olympics committee
as a pukka sport along with crochet.  Prototype designs for sprint stitchers
are already on the drawing board and a couple of "marathon" projects
are in the final stages of production.  Anyone wishing to enter their
national trials for a place in the team should be quick about it once the
official announcement is made as selection will be strictly on a first
stitched, first framed basis.
- the consumption of Brussel sprouts will finally be banned within the EU
due to their undesirable side effects which scientists believe are
contributing to global warming.
- a racehorse will win the 2015 Grand National and a bloke in a racing car
will, once again, win all the major motor racing trophies of 2015.
No surprises there then!
- lots of rain will fall in lots of places causing widespread flooding and
record temperatures in June and July will act as the catalyst for
"pop-up sewing bees" practically anywhere with air conditioning
and a place to park your bum.
- and finally, more of a threat than a prediction, there will be five
new Long Dog's released into the wild on or about:
24 January 2015
4 April 2015
20 June 2015
5 September 2015
14 November 2015
Gypsy Ju has spoken - you have been warned!
﻿
﻿
Posted by Long Dog Samplers at 00:34